What We OfferComponents procured, metal or plastic fabrication, cable preparation or a run of printing circuits boards assembled. Contact us now for a quote.

Our ServicesWe have extensive knowledge and expertise in a range of areas, find out more about our services here.

An EEC Directive on the Restriction of use of certain Hazardous Substances (RoHS) aimed at restricting the use of six substances in electrical and electronic equipment placed on the market after 1st July 2006. To be compliant, manufacturers must ensure that their products do NOT contain more than the stated amount of certain substances such as lead, cadmium and mercury. Lead is the main target for this piece if legislation.

What are these substances?

Where are these substances normally used?

Lead is mainly used for soldering components onto to circuit boards and plating contact points. Cadmium is used for electroplating and notebook batteries. Mercury is found in batteries and fluorescent lamps, switches, sensors and relays. Chromium is used in coatings on metals and as a flame retardant in a variety of plastics. The other substances are mainly used in plastic formulations.

What about products we have in stock?

They are not affected - but you will have to dispose of them with care under the WEEE directive. Products that were made or came into the EU for sale after 1st July 2006 should be RoHS compliant.

Who is responsible for ensuring compliance?

It's down to your supplier, i.e. the company who sold it to you. Ideally you should include a clause in your purchase order that requires RoHS compliance from your suppliers. Many manufacturers now include an RoHS reference within their part numbers.

What if I am supplied with goods that are not RoHS compliant?

You should ask for a replacement that is compliant and if this not forthcoming report the supplier to your local trading standards authority.

Where can I find out more? 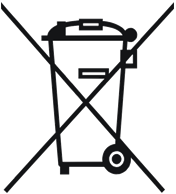 The Waste Electrical and Electronic Equipment (WEEE) Directive is aimed at cutting down the use of landfill for the disposal of Electrical and Electronic waste. The directive, which came into force in the UK in July 2007, makes manufacturers responsible for the cost of collecting, processing and recycling equipment that they have made. It also sets recycling and waste targets.

Why do we need WEEE?

In Europe, about 90 percent of electrical and electronic equipment goes into landfill sites. That's around six million tonnes of waste every year. Leakage of toxic elements and emissions into the atmosphere are a health risk to all of us.

What's the wheelie bin symbol for?

This crossed-out wheelie bin symbol is used on equipment for two reasons:

Does this mean that my supplier has to take back old equipment?

Basically yes for products that qualify, but they may well subcontract this process.

What defines a 'supplier'?

What about old equipment and defunct suppliers?

Try your local authority which will certainly have processing facilities. Failing that you can always contact a recycling firm yourself.

What about data on computer equipment?

Compliance with the WEEE Directive does not include any responsibility for secure data removal this is your responsibility. If your equipment has any data that is confidential or sensitive then your should contact a specialist recycler.